For tennis and soccer fans around the world, July 2021 marked a special time. The Wimbledon tournament was rolling out as the UEFA European Championship 2020 games were also reaching their crescendo. Fans everywhere were on the edge of their seats, anticipating the next crowned champions in each of these sports.

Outside of the U.S., soccer is almost a religion – with fans heavily invested in the games rooting for their country’s team. While following the games from a distance, we wondered about people who are fans of both sports. TennisPAL app users represent a diverse tapestry of cultures and backgrounds; no doubt, there are die-hard soccer fans among the app’s users. 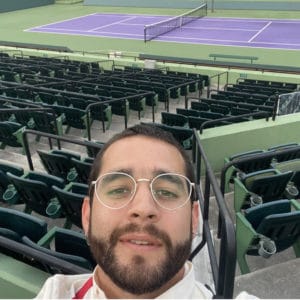 Here, we are sharing with you the profile of one such TennisPAL community member: Carlos Troncoso.

Carlos lives in Miami, Florida, and is one of the top users of the TennisPAL app. We asked Carlos about tennis – how he got started, his experience using the app, and any recommendations he has for other members of the TennisPAL community who are looking to get the most out of this app. It turns out, Carlos is a bit of a renaissance man –a soccer player, a tennis player, and a musician. Here’s his story.

Carlos’ musing with sports began with soccer at a very early age – when he was only six years old. He loved the game and ended up playing for his high school soccer team in Peru, his home country.

Soccer is a team sport, where every player has their unique position to play, and decisions are made based on the team strategy rather than individual decisions. Everyone on the team follows the same playbook.

For Carlos, there was a certain lure about trying an individual sport – something that is not team-based. A sport that allows athletes to stretch themselves, make their own judgments, even take risks without jeopardizing their team. Something like karate. Or maybe, tennis.

Around the age of 13, Carlos decided to take a break from competitive soccer. As a member of what he describes as a “navy family,” Carlos and his family had access to private social clubs accessible to navy personnel. That is where he first saw people playing tennis.

As a young teen, he found tennis intriguing and different. So, he asked his mom if he could learn to play it. Although no one in his family was a tennis player, Carlos’ mom agreed and bought him his first racket. It was only $20.00, very basic and terribly heavy.

Starting from the basics, Carlos applied the discipline and rigor he had learned as a soccer player, and within a short six months, rose from beginner tennis to the advanced level.

At the time in Peru, the cost to learn tennis was about $80.00 a month. The affordability made it easier for him to play as often as he could. He had tennis lessons three times a week; each session was two hours long. And on the days that he was not with his coach, he would practice by himself – hitting against a wall.

Of course, another special ingredient that contributed to his success was his passion. Carlos loves tennis. It’s palpable in his voice as he talks about it. “It’s about passion. When you like a sport, you build strength and work hard to get better every day. You need to play better than your friends,” he explains.

Like most young players back then, Carlos identified with a young rising tennis star from Spain, Rafa Nadal. But his biggest hero and inspiration was none other than the legendary Andre Agassi. 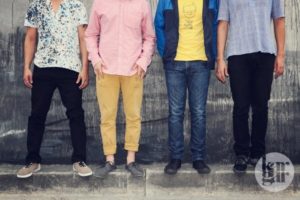 When he started college around the age of 18, his focus shifted away from tennis and towards music. His time was divided between schoolwork, friends, social life, and music. There was no time for tennis – even though he loved the sport.

Over the years, Carlos has been the vocalist in a few bands. His current band, Krisp, is based in Miami. You can listen to their music, which combines “indie rock, disco, new wave, and dream pop” on Spotify and other streaming services. We listened to their tracks, and they are awesome!

Now, as any tennis player will tell you, once you catch the tennis bug, you can’t stay away from it. In November of 2020, a friend asked Carlos if he wanted to play tennis. It had been a while since he had picked up a racket. Well, his friend obliterated him on the court! Their first game was enough of a wake-up call for Carlos to rekindle the competitive fire in him. He was determined to home in on his game of tennis. He started practicing, specifically working on the semi-Western grip his coach had taught him years ago when he was still a teenager.

After a few days of practicing, he and his friend met for a second match. His friend was blown away by the massive progress in Carlos’ game since their first game. The change was so dramatic that his friend still talks about it! “He still asks me, what happened, dude??!” Carlos jokes.

Eventually, his game surpassed his friend’s, so he needed to find new people to hit with, people who were more skilled than him. He wondered if anyone had created an app for finding tennis partners. He searched for apps, and after downloading a few and giving them a try, he found TennisPAL to be the easiest and most friendly. More importantly, it worked. He was able to immediately find people on the app and schedule games with them.

When reflecting on his first “match,” he did feel a bit strange meeting someone he didn’t know. But then, when they met on the court and started playing, he was quite impressed. “I was like, wow, this app is really good!” he said. Since the secret to improving your game is to play often and with as many people with different playing styles, the app has become his go-to solution to meet new tennis opponents. We were thrilled to learn that Carlos has found three new friends through the app with whom he regularly plays tennis.

We asked Carlos what advice he would give to other users of TennisPAL or those who are getting back into the game after taking a hiatus. “Never stop,” he says. “This is a game where you need to find your style. And it doesn’t just show up. It’s something that you need to keep working on. Tracking your progress and tweaking your movements. It’s an ongoing process.” He likens it to playing a musical instrument, “it’s like learning to play the guitar… when you start playing, your fingers will hurt. You have to keep practicing and playing until one day you realize that you can do a change in your hands from one note to another without thinking about it – instinctually. It’s the same with tennis. It’s muscle memory. The racket becomes an extension of your arm, an extension of you.”

This interview was conducted in March of 2021.