The best tennis matches are when the competition is intense and you cannot guess who will win the match. When two players are perfectly matched up in their abilities and strengths, the game becomes a thrilling drama of serves, volleys, and returns. That’s why partner matching is at the core of the TennisPAL app.

Get Your Skill Level Verified on the TennisPAL App

You can get your skill level approved by a TennisPAL coach by submitting a video to verify your abilities. Simply download the app and update your profile to an NTRP rating of 4.5 or higher. You will then be asked to submit a video of your gameplay to be verified by a coach. TennisPAL Coaches quickly review your video and can give you an approved skill rating badge in your profile.

Universal Tennis Ratings is calculated using a complex and proprietary computer algorithm. The governing organization calculates this score for tennis athletes. According to Universal Tennis, generally, UTRs are calculated like this: We look at the last thirty matches that you have played (during the past 12 months), and calculate the percentage games that you won in each match. Then, for each of those matches, we calculate a “dynamic” rating number, which is based on your and your opponent’s pre-match UTRs and the percentage of games that you won in the match. The dynamic rating number is indicative of what your rating would be if your whole rating were only to be based on the results from that one match. The higher the percentage of games you win in a match, the higher your dynamic rating for that match; the lower the percentage of games you win in a match, the lower your dynamic rating for that match. The algorithm then considers such things as: how far apart your and your opponent’s UTRs are, what the format (e.g., 8-game pro set, 2-out-3 sets, etc.) of the match was, the reliability of your opponent’s personal rating, how many of your most recent (30) matches were played against that same opponent, whether the loser reached the Competitive Threshold in the match, whether the match was a blowout win (e.g., 6-0, 6-1) for either player, whether the match was played to its completion, whether there was a prohibitive favorite in the match, and other factors… and then assigns a weighting factor to the dynamic rating for that match. The algorithm then calculates a weighted average of the dynamic ratings of all of the last 30 matches that you played during the past year…. and, voila, there’s your UTR.

USTA’s National Tennis Rating Program is similar to UTR because it is also a computer generated score, however, the criteria that it uses to calculate is drastically different. Your current NTRP rating is calculated by using your year end rating, your opponent’s rating, and the margin of victory or defeat. Although your official rating is calculated by the USTA, they provide tools for self rating and skill level guidelines for you to get a rough idea of your level. 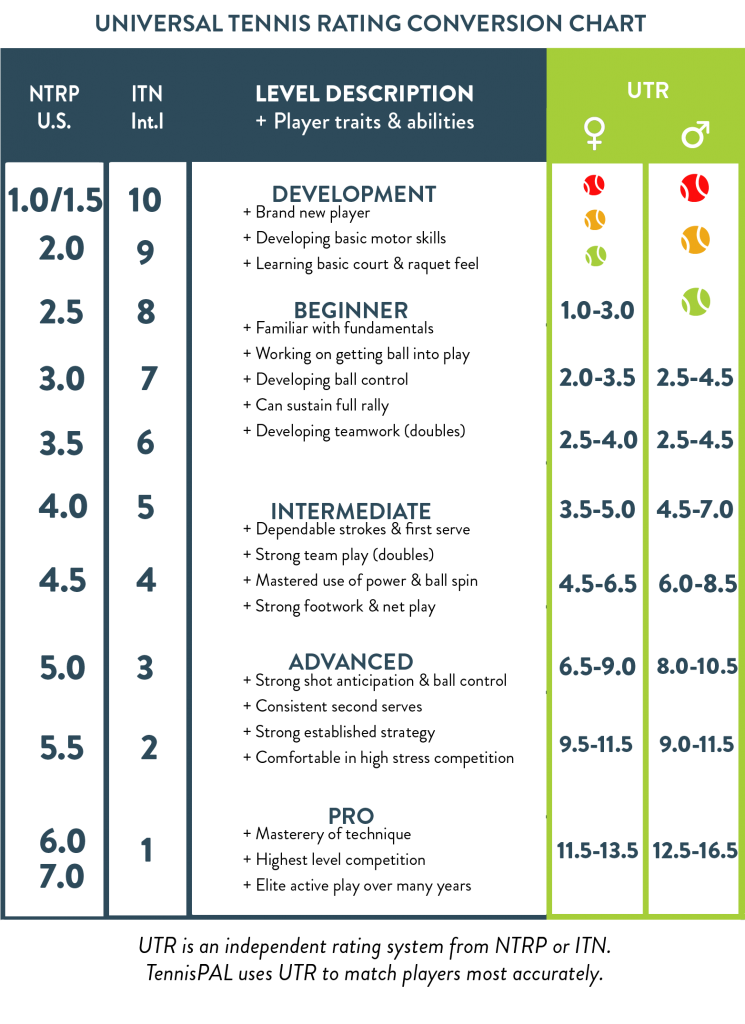 At the core of TennisPAL is our Find PAL feature – we want you to be able to find a tennis anywhere, any time. An important aspect of finding a good tennis partner is to be matched up with someone with the same skill level. That is why the TennisPAL app searches for players who are close to your UTR skill level. This perfect pairing is what makes the difference between having an amazing tennis match or not.

Being able to show up to the court with everything you need for a winning match start with having the right equipment. If you’re looking for new gear, Tennis Warehouse has the best selection of tennis gear.

Fahd is a contributor for TennisPAL. Although he does not play tennis himself, he enjoys watching and learning about the sport. Aside from just writing about tennis, Fahd also shares company news and information about app updates for TennisPAL. Don't forget to comment and download the TennisPAL app on the Apple or Google app stores.