One of the unique and most delightful aspects of the TennisPAL community is the diversity of its members. It is a tapestry of people from different backgrounds, cultures, and languages, all of whom are united by their passion for the game of tennis. Every member has their story of how they came to love tennis and its role in their lives.

For this profile, we will be introducing you to a father with a dream – a man determined to guide his children towards the path to tennis greatness. His name is George Avlayee. George’s story is one of inspiration and sacrifice. Originally from Liberia, like most immigrants, he brought his family to the U.S. to build a better future for them. 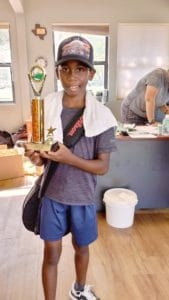 If you are a TennisPAL member and regularly scroll through the Moments feed on the app, you have probably come across pictures and videos of George’s children. You see the boys, Obama George, ten, and Robert, nine, posing with their medals and trophies, sporting the triumphant smile of accomplishment in the pictures. And his youngest, daughter Georgina, is a rising star, showing a level of talent and drive for excellence that are the hallmarks of all champions. 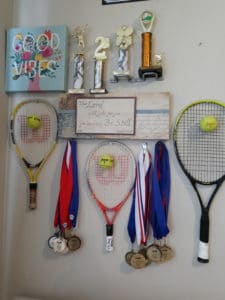 Speaking with George, I can’t help but wonder if the Avlayees will be the next generation of U.S. tennis royalty, like Venus and Serena Williams.

It is important to remember that this family is only at the beginning of their journey. What is remarkable is that despite the challenges of everyday life, this young immigrant family has already accomplished so much in such a short time. As George explains, “it’s by God’s great well.”

While their story may have a serendipitous beginning, what made it into a reality is George’s clarity of vision and determination and his children’s passion, commitment, and hard work.

Their journey starts about six years ago, on a cold November evening in Killeen, Texas. George, tired at work and frustrated with life, is looking to curb his stress. So, on his way home, he stops by the local Walmart and randomly selects a tennis racket and a can of balls. Maybe it is because back home in Liberia, he used to watch tennis on television with his older brother. Maybe because growing up in West Africa, Serena Williams symbolized the realization of the American dream. Maybe because he could use it indoors to hit the ball against the wall in their small apartment in Killeen, Texas.

Regardless of the reason, the rest is history.

The children are immediately intrigued by this new toy and want to play. They even form a sort of ritual where they would search for the racket and balls when George is away at work and fight over who could play with it when George is home. After about a week of this, finally, he decides to buy the kids, Obama George and Robert, their own rackets. At that time, Obama George is four years old, and Robert, three. George still has those rackets, proudly displayed on his living room wall. 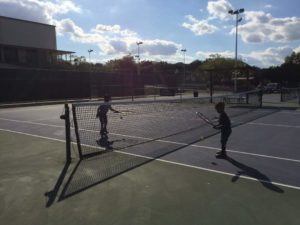 “The tennis culture in the U.S. is amazing. I am not a player, but I like tennis and [am] knowledgeable about it. And the Children love the game,” George explains. That first winter, he couldn’t keep the kids inside – all they wanted to do was to go out, despite the cold, to hit the tennis balls with their new rackets. George would say to them, “Okay! Let’s go!” He laughs at the memory, recalling how people would say to him, “George, what are you doing?? It’s cold!!”

The Avlayees are a regular staple of the local tennis courts in Austin, Texas. They play five days a week, and each time they are on the court, they spend between two to three hours practicing. Their routine is to wake up around four in the morning, eat breakfast and get ready so that they can be on a court by 5:00 AM. They play for about two hours before returning in time for the children to attend their classes. They often return to the courts in the evenings, after school, and when George is home from work. On weekends, they play eight hours a day! They attend between two to three tournaments a month. When they are not on the court hitting balls or in school studying, they are at home watching every possible tennis match and analyzing it together.

There is nearly an army-like rigor and discipline to their routine. George jokes about having read every book ever written about tennis. Even their house is like a shrine to tennis, with trophies, certificates, pictures, and rackets decorating every wall and display.

But what is more important is that the children really love it. Even their little sister, Georgina, has joined in. Having only started playing earlier this year, she is already exhibiting a great talent for the game, outperforming her older brothers and beating them on the tennis court. People often watch in awe when she is playing.

One can’t help but feel inspired and moved by this father’s love and care for his children and their future. He hopes to help his children succeed in life, achieve something big, and realize the American dream. In them, he has instilled a sense of purpose and discipline. He has given them direction and focus. He has taught them to face challenges head-on, be mentally strong, and persevere. “Sometimes you win, and sometimes you lose. If you fail, that is okay. Learn from your mistakes, work hard, and try again,” is his advice to his children.

While interviewing George, I could hear the laughter and excitement of his children in the background. It turns out they were watching a tennis match on television. All of this against the backdrop of a wall covered with every racket they have ever played with since that cold November evening when George decided to pick a tennis racket at Walmart. Perhaps one day, we will be watching the Avlayees on television, as they compete in the great tennis tournaments. As George would say, “By God’s great we will.”