Goran Ivanisevic is a Great Coach for Milos

Goran Ivanisevic is a Great Coach for Milos

Milos has struggled with injuries in the last couple of years. However, I think we tend to forget how good a player this guy is. This guy’s been consistently a top ten player for the last four years. Just take a look at his seeding at Grand Slams. 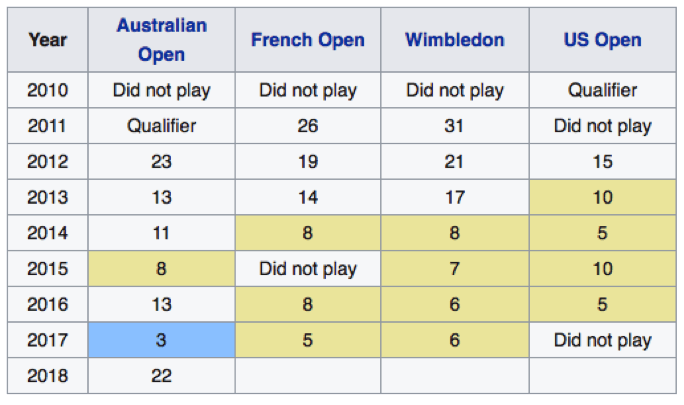 We tend to forget about Milos because exiting youngsters like Kyrgios and Zverev, are simply more fun to talk about, and frankly, also to watch. Watching Milos give Del Potro, arguably the best player in the world right now, a run for his money, reminded me how boring his game is. No offence to Milos, there’s nothing wrong with a boring game. Boring wins matches, just ask Pete Sampras.

All criticism aside, Milos belongs in the top 10, and is a Grand Slam contender. The one thing that is not boring about Milos right now is bringing Goran Ivanisevic on board as a coach. This relationship is said to be on a trial basis, and pending positive results. My advice to Milos is to end his coaching search right now and get Goran on board. Goran has showed he can coach big strong guys and shape them into Grand Slam winners. He did so with Marin Cilic and he can do it with Milos. Also, we know that Milos understands that Wimbledon is his best shot at a Grand Slam. Who better to coach him than the guy who walked into Wimbledon unseeded in 2001 to take that title. Never mind the three other classic finals he contested, and lost in the 90s against Agasssi and Sampras. Finally, Goran is funny, entertaining, passionate, temperamental, and moody. All attributes that made him one of the most interesting players to watch in the 90s.

No mention of Goran Ivanisevic is complete without a highlight reel of his incredible 2001 Wimbledon final win against Pat Rafter. I still consider this final the best Grand Slam final in the history of tennis. Party because I huge Goran fan, and you should be too.

Marco is our Market Consultant for the Chicagoland area. Marco grew up playing tennis in Latin America and Europe. He prides himself in his ability to grind out every point – Rafa Nadal style! He is always up for a match so hit him up on the TennisPAL app. When he’s not playing tennis, he’s providing some entertaining tennis commentary on our blog. He also enjoys running around trying to keep his four-year-old boy and one-year-old daughter from hurting themselves.