The Inspiring Rivalry of Bjorn Borg and John McEnroe

The Inspiring Rivalry of Bjorn Borg and John McEnroe

Bjorn Borg is the reason that I am a tennis player today. 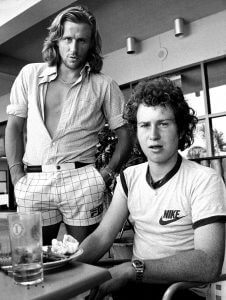 As a teenager, watching him play the game with his long blond hair, in his cool headband and most of all with his steely calm on the court, made me pick up a tennis racquet for the first time.

And I have not put it down since.

Moving to the silver screen

For Borg to shine, he needed a worthy rival to bring out the beauty of the game and underline his calmness. So who could be more effective than the loud-mouth brat, John McEnroe! So it is no surprise that Janus Metz Pedersen is working on an upcoming English-language Swedish biographical film focusing on their famous rivalry at the 1980 Wimbledon Championships: Borg vs McEnroe.

Learning about this upcoming film reminded me of many great memories watching Bjorn Borg and John McEnroe on the tennis court, cheering one on and cursing the other one! In my opinion, the rivalry between these two legends had a major effect on an entire generation of tennis players and their era started many trends shaping the modern game of tennis.

Borg was a great athlete, with an impressive endurance. His style was as distinctive style as his appearance. He used heavy topspin on both his forehand and backhand. A right-handed player who picked up the two-handed backhand after Jimmy Connors adopted it.

John McEnroe in contrast was a lefty, known for his shot-making artistry and volleying skills. He had a one-handed backhand and used a continental grip for both his forehand and backhand.

Borg was mainly a baseliner and a grinder, whereas was known for great reflexes and deft hands, giving him a superior net game. 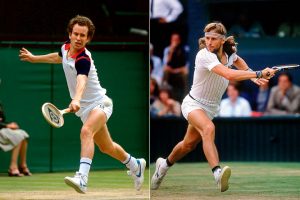 But the greatest differentiator between them was their attitude on the court. Borg was calm, cool and collected, while McEnroe stood out for his shenanigans on court that frequently landed him in trouble with umpires and tennis authorities.

I have to admit that in the late 70s and early 80s when these two were competing, I could not stand McEnroe. He was the arrogant, irritating guy, challenging the elegant and calm Borg. Now looking back, I understand that John McEnroe was a great player who needed to make a space for himself by standing in opposition to the existing champ. As the years have gone by,I learned more about McEnroe the legend, the savvy and balanced commentator, the father and family man, and now I confess that I have grown fond of him. McEnroe shares great insights about the game, he identifies important points about players and matches, he advocates for the players, and he has become a great contributor to everything related to tennis. Although, I would have still cheered for Borg,I appreciate that John McEnroe was there to make tennis even more interesting to watch! 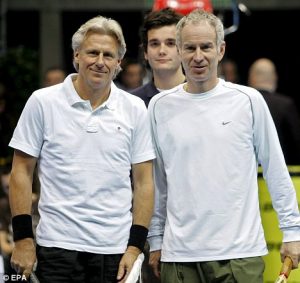 The Borg vs McEnroe movie will be released in September 2017.

If you want to feel like Borg and McEnroe and hit the tennis courts with your perfect rival, find them on the TennisPAL app.

Becoming a part of the TennisPAL community is simple. Download the TennisPAL app in the Apple App Store or Google Play Store and sign up. In the app, you can find people who are close to you for a fun tennis game or coaching session. Explore the community and connect with people in our moments feed on and off of the court. Catch up on the latest news from tournaments and rankings. TennisPAL is the active community of tennis aficionados that you have been looking for.

Cheers to two great players and legends: Bjorn Borg and John McEnroe, and to you: the ultimate tennis fan!

Haleh is the founder of SageDom and creator of TennisPAL. Haleh is the ultimate tennis lover; if she is not on the court playing, she is watching tennis, reading or thinking about it! If you ever like to hit or chat about tennis, you can find her on the TennisPAL app!